Answers to Your Holiday Questions about North Devon 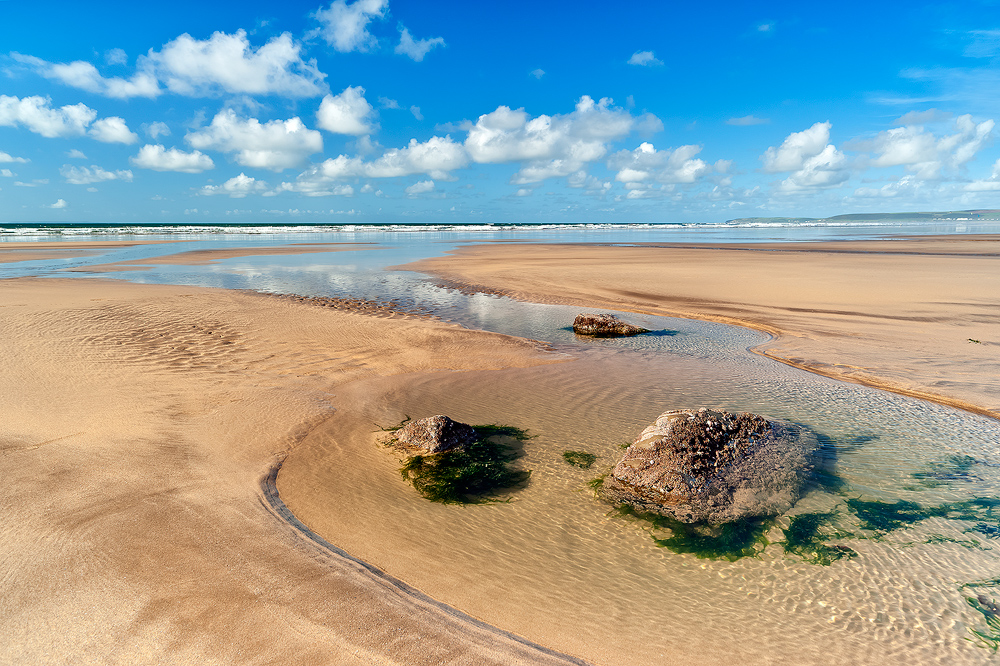 Where can I holiday in North Devon?

The main holiday destinations in North Devon are:

These are the major tourist destinations with the largest holiday parks at Woolacombe, Croyde, Westward Ho! and Combe Martin. There are lots of other holiday parks in the area, some are set slightly inland such as Ilfracombe, Braunton and Bideford areas and around Exmoor where there are some beautiful  places to stay and rural campsites on the moor. Woolacombe has the highest number of large holiday parks with Croyde and Westward Ho! following on. There are inland places to stay in Braunton, Bideford, Barnstaple and several parks around the Combe Martin area.  There are numerous hotels, notably the Saunton Sands Hotel, the Woolacombe Bay Hotel and the stunning Watersmeet Hotel in Mortehoe.

Which towns are in North Devon?

The main towns in north Devon are:

Braunton is one of the largest villages in England and is not actually a town, although summer traffic congestion might suggest otherwise! Barnstaple is the municipal town for the area and the largest town and Bideford is the second largest town in the area. The majority of the traffic arriving in North Devon either goes through or passes by Barnstaple and this is the most centrally located town in terms of the transport network, it is also the only town with a railway station. Lynton is a small Victorian town and along with Lynmouth, it is known locally as Little Switzerland, a beautiful place to visit. Torrington, Holsworthy and South Molton are traditional North Devon farming towns that have retained a large element of their character and agricultural background.

North Devon is far more open to the elements than South Devon and catches the Atlantic ocean swells to a greater extent than South Devon. This means bigger waves and longer and sandy beaches, South Devon is more sedate, is often warmer, sunnier and gets  lower rainfall. North Devon certainly has a tougher landscape and is dominated by Exmoor and steep hills whereas South Devon has a rolling and rural countryside which is often easier to explore for those less able to walk distances and cope with the steep hills. The South West Coastal Path runs along the sea edges of both North and South Devon with the north being dominated by more spectacular cliffs, especially around the Combe Martin area and Morte Point. The South Devon coastal path is easier to walk and whilst North Devon has long stretches of Sandy beaches such as Woolacombe, Saunton and Westward Ho!, the beaches in South Devon tend to be smaller with a number of beautiful coves to explore.

North Devon is nice if you are looking for award winning sandy beaches like Woolacombe, Croyde, Saunton and Westward Ho! It is also home to the Exmoor National Park and stunning places to visit like Clovelly and Lynton and Lynmouth. The main selling point of North Devon and the beaches and the National Park. Water sports like surfing, coasteering and stand up paddleboarding dominate the sea space and the beaches are very busy during the summer months. A hot day in the summer holidays will see the main beaches very busy and the car parks full early in the morning! There are stunning walks to be had across Exmoor and the South West Coastal Path, Baggy Point, Morte Point, Little Hangman and Great Hangman as well as Hartland to Spekes Mill are completely breath taking. There are great shopping options with a large outlet park near Bideford and Bideford also has some great boutique shops. The main retail centre is Barnstaple and Braunton is noted for a large number of surf shops. Outdoor activities dominate as you would expect with fantastic coasteering centres at Combe Martin and Croyde, there are numerous surf schools on all of the major beaches and plenty of outdoor activities on Exmoor.

Which is warmer South or North Devon?

What can adults do in North Devon?

North Devon is all about activities for adults, a great location for a party of adults to connect with nature and have some fun. From walking over Exmoor or the stunning South West Coastal Path to surf lessons and coasteering, it is all about the great outdoors and North Devon has it in abundance. If you want to try surfing for the first time, all of the major beaches have their own surf schools, usually more than one and they provide the equipment. If you want adrenaline, coasteering is fantastic fun, it will definitely get your heart racing and if you have never done it before, it is a brilliant new experience with centres around North Devon such as Watermouth Cove (stunningly beautiful and perfect for coasteering) and Croyde amongst many others.  There are an abundance of golf courses, notably Saunton Sands and Royal North Devon as well as equestrian centres near the beaches at Woolacombe and Croyde and several on Exmoor. For a more relaxed day out, RHS at Rosemoor, Clovelly Court, Arlington Court and Hartland Abbey are worth a visit, Hartland Abbey is the location for the tv series Mallory Towers!

Where should I stop in North Devon?

The major holiday parks in North Devon are based around the beaches. Woolacombe has three large holiday parks that have a bus service to the beach and several smaller holiday parks, Croyde has one large holiday park with easy access to the beach and several smaller holiday parks in the local area stretching back inland and towards Braunton. Westward Ho! has several medium sized holiday parks, all with very easy access to the beach along level walks. There are several hotels, Ilfracombe has many with new hotels on their way, Barnstaple and Bideford all have inland based hotels and there are several hotels in Woolacombe and of course the Saunton Sands Hotel. Holiday cottages are aplenty in North Devon, pretty much everywhere you want to stay. The National Trust has several properties available, including some on Lundy Island. Croyde, Woolacombe, Braunton, Ilfracombe, Instow and westward Ho! all have a large number of very high quality holiday cottages and holiday apartments available.