A Guide to North Devon’s Beaches

Beachside Holiday Park is superbly positioned overlooking Westward Ho! beach, one of North Devon’s 4 major beaches, here is a guide for those looking to come to Beachside, one of the best positioned holiday parks in North Devon for family beach holidays with a range of luxury static caravans and holiday apartments that are situated overlooking the Blue Flag Westward Ho! Beach.

Westward Ho! beach is approximately two miles long and is backed by a huge pebble ridge that separates and protects the Northam Burrows Country Park that sits behind the beach. This is a family friendly beach with its own surf school and is very popular during the summer months. The village has a range of shops and amenities that are very accessible from the beach with toilets, showers and plenty of parking. 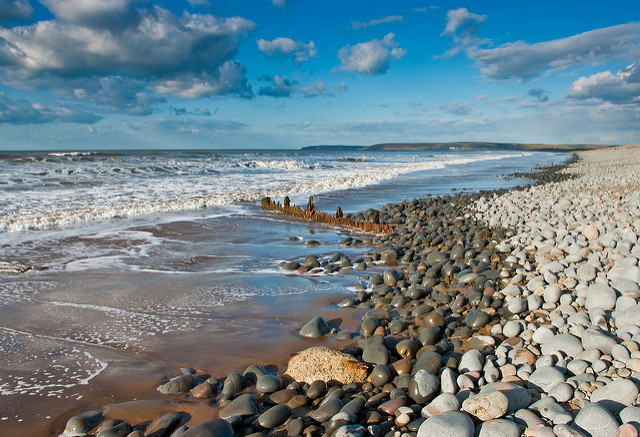 There are numerous places to eat and shop and the village has undergone a significant transformation in recent years with a lot of high quality developments including new restaurants and shops. The beach has a high water quality rating and is gently sloping like Saunton and is therefore ideal for families that want to learn to surf in safety. There is a lifeguard presence on the beach during the main season with an elevated lifeguard lookout post.

Saunton beach is approximately three and a half miles long, a gently sloping sandy beach backed by an extensive sand dunes system that protects the Braunton Burrows, the Great Field of Braunton and the Saunton Golf Course. The beach offers good surf on any easterly wind and is slightly protected by the headland from gentle northerly wind systems. Saunton is also a good beach for learning to surf as the nature of the sand system means that rip currents are typically minimal. There are several surf schools and a surf hire shop in the main car park. 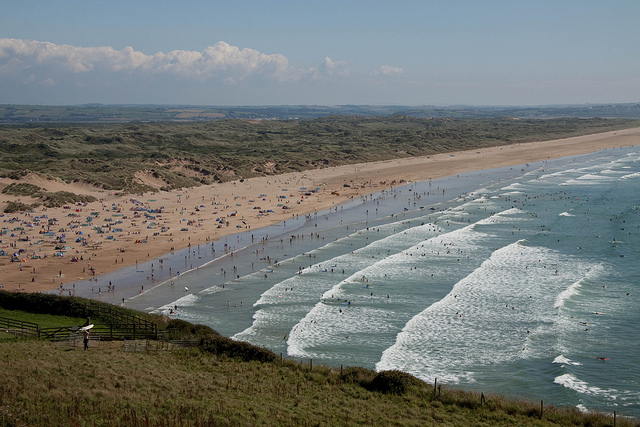 The beach is very popular, especially with families and long boarders and the car park does get filled to capacity early on hot days in the main summer season. The beach is also dog friendly and there are several bins along the beach during the summer. Free showers are provided and there is a restaurant, café and shop at the entrance to the beach. Overall, perfect for families looking for a safe and sandy beach, the size of the car park limits the number of visitors so although it gets crowded on hot days, you can always find some space.

Croyde has always been one of the most popular villages and beaches in North Devon, its reputation as one of the top surfing beaches in the country means that it is always busy in the sea. The nature of the beach geology means that, especially at low tide, banks form which create great surf with several patterns of peaks and rips along the beach at low tide. Thus, the beach, surfing and bathing areas can get quite crowded in the summer months. Families can have fantastic fun in the waves, the beach is patrolled in the main holiday season with bathing areas clearly marked and it is advised that you adhere to these areas as the RNLI Lifeguards have extensive knowledge of the beach and they are there for your safety! 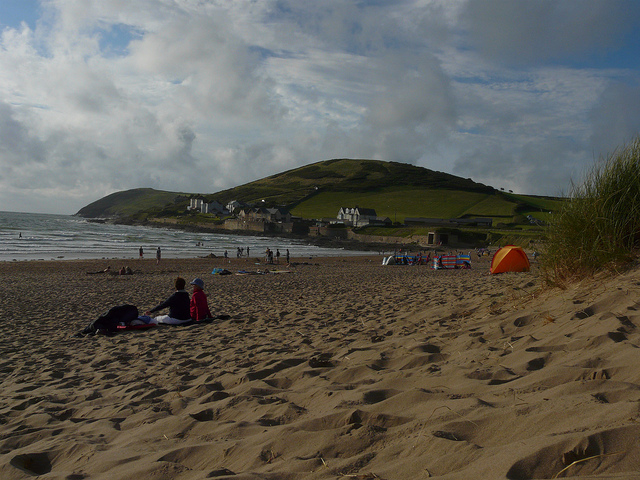 Croyde beach is also easily accessible, the car park at Down End is quite extensive although there is a short walk over the rocks onto the main beach but it isn’t very difficult. There are also fantastic rock pools for children to enjoy at both ends of the beach. At the south ‘Ruda’ end of the beach, there is easier access for those that want to avoid the rocks but the car parks get full and fast in the summer months. There are toilet facilities at both Down End and Ruda End during the summer months and also shops at both ends. Several surf schools also operate at the beach and if you want to learn to surf, it is advisable to book a lesson with a school that has qualified instructors that know the beach well!

To reach Putsborough Beach, you will invariably go through Croyde taking the left hand turn just after Billy Buds and then stay on this road, it is narrow and twisty so be patient. There is a large car park overlooking the main beach with steps down by the well-stocked shop and café, alternatively there is a narrow lane that takes you right down to the beach which is accessed from the north end of the car park. Putsborough is popular with families and surfers, the large headland that leads out to Baggy Point protects the beach from the dominant south westerly winds so it tends to be more sheltered than the other beaches. This makes it warmer and the surf better from southerly winds. Putsborough does not have a lifeguard patrol though although the beach is popular and it does have a good safety record. 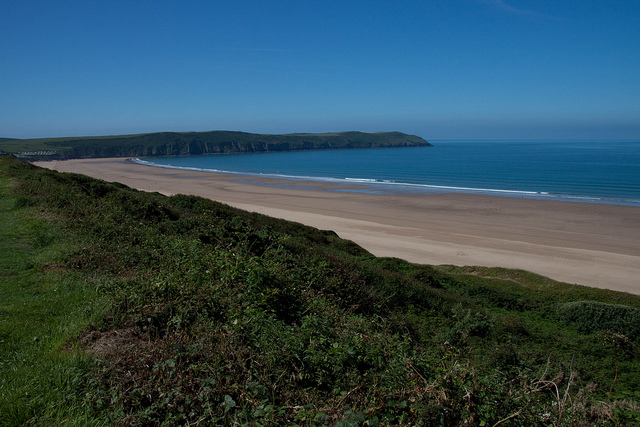 There are rip currents when the surf is big but it is fairly safe in small surf. The water quality is also exceptional at Putsborough, when there are no waves, the water is often crystal clear and you can often spot a fish or two! The beach is also less well known and slightly more difficult to access than the other beaches so it tends to be less crowded, if you get up early on a hot summers day, it does provide a great base for a day at the beach where you don’t have to fight for a bit of sand space.

Woolacombe is often seen as the jewel in the crown and is often in many travel writers top beaches in the UK and even the world. This is an award winning beach that has plenty of positives, great surf and great sand, soft, clean and perfect for building an extensive sand castle system. The beach has several large car parks to the side and the back of the beach although Marine Drive is a bit steep for some. The access to the beach is excellent with steps down from the car park to the north or a gently sloping tarmacked path with the shop and café to the side. There is also easy access by the stream where there is also a shop and facilities. 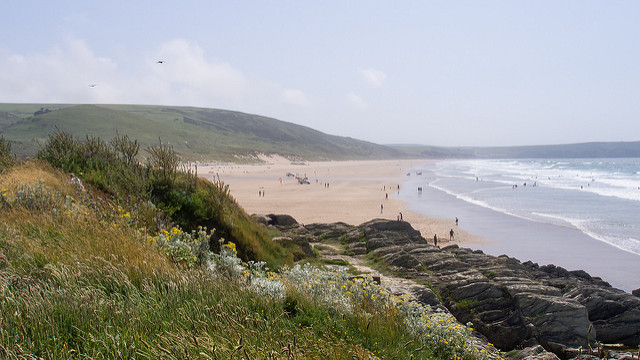 Woolacombe is popular, very popular! The beach has a full lifeguard service during the main summer season and even has small rides for children to the north end. You can also find food vans during the main season serving ice cream and drinks and there are several bins to help you keep the beach and the ocean clean. Several surf schools operate at the beach all year around with bases in the main village centre which is just a short walk from the beach. Note that on very hot days during the main summer holidays, the main car parks fill up early and the beach will be very busy so get up early if you want your favourite spot! Like Putsborough, the water quality at Woolacombe is also generally exceptional and the beach itself is cleaned regularly, this beach regularly wins awards for several very good reasons!